Attention, Stampers! The March on Harrisburg is back!

The latest March on Harrisburg begins this Saturday, April 27th, in Philadelphia and culminates with a protest in Harrisburg on Monday, March 6th! The March is an incredible opportunity to push for democracy reform on the state level, and we encourage you to attend if you can!

What is the March on Harrisburg?

The March on Harrisburg is a citizen protest against corruption in Pennsylvania’s state government. It began as a result of the Democracy Spring march from Philadelphia to Washington, D.C. in April 2016. While being held in a warehouse-turned-holding cell in D.C., several Pennsylvanians decided to fight corruption on the state level and organize a march to Harrisburg, the state capital. Activists traveled 150 miles over the course of two Marches for the cause in 2017, and they’re back for more!

This March begins in Philadelphia on April 27th and lasts nine days, covering 105 miles to Harrisburg. Participants are taking on the issue of legalized bribery in Pennsylvania, one of the eight states that have no gift limits on what politicians can receive. Bribes have included luxury vacations, season sports passes, fancy dinners, and sold-out concert tickets. March on Harrisburg organizers proposed a gift ban bill that was introduced in the House last week as HB1291.

How does this work? Are participants marching nonstop?

Absolutely not! Participants walk 10-15 miles per day and make frequent stops for snacks, lunch, and bathroom breaks. There are accommodations along the route, and the March on Harrisburg provides all housing and meals.

Do I need to stay for the entire March?

Nope. You can stay for one block, one mile, one day, or the whole enchilada – it’s up to you!

Do I need to RSVP?

Yes! The organizers need an accurate headcount for housing, meals, and transportation.

Do I need to bring anything?

The March on Harrisburg provides a recommended packing list for participants: warm and cool clothes, sleeping bag and/or pillow, comfortable walking shoes, clean socks, toiletry supplies, towel (showers are rarely, but sometimes available), sunscreen/bug spray, and poncho. Drivers along the route will transport participants’ belongings along the route, so you don’t have to walk with them.

What if I can’t march? Can I still get involved?

Of course! The March on Harrisburg is only possible through the support of dedicated volunteers. You can RSVP for non-marching positions, including drivers, cooks, and medics.

What if I can’t be in Pennsylvania but still want to support the cause?

There are ways to amplify the message of these democracy warriors that don’t involve traveling to Eastern PA. You can donate to March on Harrisburg to help cover the cost of housing, food, and transport, as well as enable future marches for reform. You can also sign the petition to ban political bribes in Pennsylvania. Everything helps!

For more information on the March and on March on Harrisburg, check out their website and their Facebook. 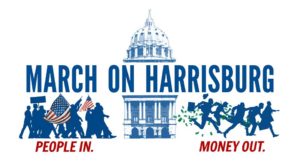