Politicians don’t do what voters want. They do what big donors want. Sen. John McCain calls it “legalized bribery.” Big money from special interests and corporations pervert our laws. It’s why our tax code is riddled with loopholes benefiting corporations and the wealthy (that results in everyone else paying more taxes), it’s why our energy policy favors big oil, it’s why our prescription drugs are overpriced, it’s why student debt is so high, and why our healthcare policy lags so far behind other developed countries.

Thanks to terrible Supreme Court rulings such as Citizens United, politicians rely more and more on big money to win elections. And when our lawmakers arrive in Washington, too often, they represent the donors and our laws reflect the special interest. Not their voters and not the public interest.

Don’t take our word for it. A study by professors at Princeton and Northwestern revealed that our representatives are more likely to pass laws that a minority of wealthy people want than what the majority of voters want.

We need to win the 28th Amendment to U.S. Constitution to overturn Citizens United and common sense reforms such as robust public financing for all elections, a ban on corporations and unions from spending money to influence elections, and strict limits on campaign contributions.

Every vote should count. But in many states, lots of people never even get to vote. Discriminatory barriers disproportionately block minorities, students, the disabled, and the poor from exercising their right to vote.

In 2012, African-Americans waited nearly twice as long to vote as White-Americans. In many areas, they had to stand in line for as much as 5 hours.

Other barriers to voting include complex voter registration rules, long lines at the polling booth, the limiting of early and absentee voting, the restricting of voting rights for people with felony convictions, and other practices.

We need to restore the Voting Rights Act, which the U.S. Supreme Court has begun to dismantle such as in Shelby County v. Holder (2013)—making it even more crucial for us to ensure strong protections at the local, state, and federal level of our government. And we need to modernize the voter registration process, such as online registration, portable registration, pre-registration, same-day registration, and automatic registration, as well as the restoration of voting rights for ex-offenders and expanded early and absentee voting.

So you want to overturn Citizens United, stamp money out of politics, and stop the attack on voting rights? We do too! There’s a lot you can do to have an impact. To help you get started, we’ve put together a few pointers on how you can get involved and help grow this movement even bigger.

First, the easy part–stamping! Get a stamp to start getting the word out about big money’s corruptive influence in politics. Stamp every dollar that passes through your hands. It’s fun and easy, plus every stamped bill is seen by over 875 people. Spend your stamped money with pride! Let people know that your dollar is “Not to be used for bribing politicians“–you’ll be surprised by how many people are interested in learning about this issue and the campaign. Be sure to check out our stamper tips for the most effective way to stamp your moolah.

Learn About Money in Politics and the Attack on Voting Rights

It’s very important to learn about Stamp Stampede’s mission and goals, and stay informed about this issue. If you’re looking for a basic understanding of money in politics and voting rights, check out our quick guide here. To learn even more, you can browse our list of online resources, recommended books and films, and educational videos to help get you started. These resources outline the influence of money in politics and highlight some of the different reforms to fix our democracy.

The single best way to build the Stampede community is to share it. Talk to your friends, your family and your neighbors. Ask them what they think about the amount of money being spent on elections. Check out our “How to Explain Stamping” guide for easy ways to talk about our campaign to friends, family members, and new acquaintances.

Stamping stations are our very awesome, unique way of rapidly building stamping momentum in a local community. While many people may have seen your stamped money in town, some might need encouragement to join the Stampede. If you’re part of a club, organization that plans meetings and events, or own a business, you can get your own stamping station for FREE. 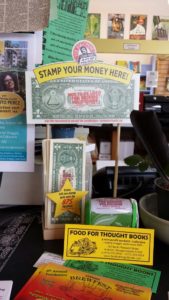 How to recruit local businesses to join the Stampede. All those local businesses where you’ve been spending your stamped money have definitely noticed the Stampede in their tills. Create a list of businesses that have made positive comments about your beautified bucks, and visit them again. Inform the business of the Stampede. Tell them about how 80% of Americans support getting big money out of politics, and how this is an apolitical and non-partisan American movement. Inform the business that 16 states have voted to overturn the Supreme Court’s Citizens United decision and get big money out of our elections. Finally, invite local businesses to try out one of our stamping stations! 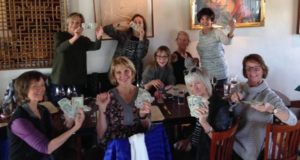 Stamping at home is a great way to make a difference, but stamping with friends is even more fun! Throw a party and spread the Stampede among your friends! All you need are a few of your favorite people, a few stamps, and some brochures. You can host one at your house, or meet up at a favorite cafe or bar. Plan a get-together or bring some stamps to a planned gathering–turn it into a stamping party! Just make sure to ask people to bring cash. Be sure to take lots of photos of your stamping party and share them on social media with the hashtag #MoneyOutVotersIn! Pretty soon you will be spreading the message to millions of people.

Inviting people to a stamping party. Here is some sample language for a Stamping Party, which you can drop right into a service like Evite or put into a group e-mail message, etc.–

You are invited to come to a party to stamp money out of politics and stop the attack on voting rights. Like a typical political fundraiser, I’m going to ask you to bring some money. But unlike a typical fundraiser, I’m asking you to take your cash home with you when we are done. At this party, we will be rubber-stamping our dollars with messages like “Not To Be Used To Bribe Politicians.”

I will supply the stamps, but you will need to bring lots of bucks, preferably in singles. At the end, the money you stamped can be redeposited at your bank or spent. Each dollar we stamp can be seen by up to 875 people over the next 2 ½ years, and will help build the movement to get money out of politics. It’s economic jujitsu–using money to get money out of politics. Don’t worry, it’s perfectly legal. This party is part of a national movement to take back our government from big money. You can learn more about this grassroots campaign at StampStampede.org or write me with any questions. See you there!

Stamping at home on your own or with family and friends is fun, but you can still take your impact to a whole new level. Here are some ideas:

Tabling at an event. All you need is a small folding table or any other flat hard surface, one or more stamps, ink-pads (if you’re not using self-inking stamps). Optional extras are a bookmark-sized flier that explains the need to get money out of politics and how Stamp Stampede works, and a copy of the official legal opinion that explains how stamping money is legal.

*Here are some places where you can have yourself a delightful and productive MSO experience:

Organize! Organize a local event, such as a screening of a money-in-politics film like “Pay 2 Play” OR you can coordinate with local chapters of other groups in the movement (see below) to get them to start stamping too.

Volunteer with Our Partner Groups

We’re not alone! There are many other organizations out there working hard to get money out of politics. Stamping is an important part of building the movement. But the groups below are all about putting that movement into action. They even have their own StampStampede.org stamps! American Promise, Wolf PAC, Represent.Us, and Move to Amend each have amazing nationwide volunteer communities that can use your help. Check out all our awesome partners here.

If you have any questions, contact the Stamp Stampede Team at info@stampstampede.org.