On April 15, 2015, U.S. postal worker Doug Hughes landed a gyrocopter on the U.S. Capitol’s West Lawn, whereafter Capitol Police shortly arrested him. His bizarre but courageous flight made headlines across the country. More importantly, Doug took flight for a reason: to bring attention to the movement for campaign finance reform.

Doug carried with him 535 letters, one for each member of Congress. In each letter, Doug wrote the following:

“I’m demanding reform and declaring a voter’s rebellion in a manner consistent with Jefferson’s description of rights in the Declaration of Independence. As a member of Congress, you have three options. 1. You may pretend corruption does not exist. 2. You may pretend to oppose corruption while you sabotage reform. 3. You may actively participate in real reform.”

Following his historic 70-mile flight, Doug was sentenced to 120 days in federal prison and a year of probation for illegally operating an aircraft. Authorities forced Doug to forfeit his gyrocopter, but he eventually mailed his letters two years later after regaining them from Capitol Police.

Among democracy reform advocates, Doug Hughes is adored. Our own Ben and Jerry were among 1,400 activists arrested in campaign finance reform demonstrations held shortly before Doug’s sentencing. He inspired two different ballads (you can hear them here and here). Doug even received a Courage Award from RepresentUs during their first Unrig the System Summit in 2018 (see the acceptance video here).

Now Doug is back for Round 2 with a new gyrocopter (and a license to fly) in tow. His destination? The Lower 48. In Spring 2020, Doug plans to visit every state capital in the continental United States to meet with state and local elected officials, community leaders, activists, and regular citizens and discuss the national movement to get big money out of politics before concluding with a major demonstration in D.C. The tour will even be the subject of a six-part documentary for cable-TV, a deep dive into the nature of corruption that not only analyzes the problem but highlights the solutions available and the groups working to implement reform! The D.C. demonstration will take place shortly before the 2020 election, pushing congressional and presidential candidates to take a stand. 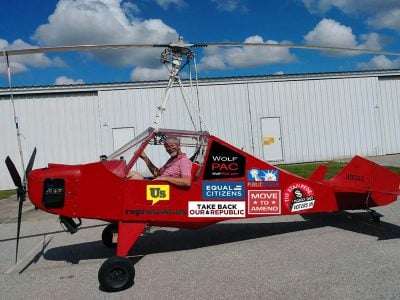 The Stamp Stampede is proud to be among the sponsors of Doug’s 2020 tour, but his flight will require all hands on deck. If everyone gives what they can this project, real reform will take flight. Together, we’ll soon replace the scourge of big money in politics with equal representation.