We’ve established that Citizens United was a disastrous decision for American democracy. But did you know that it also allowed foreign interests to dodge federal laws to influence our elections? 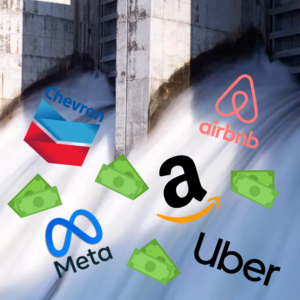 According to federal election law, foreign governments and individuals are not allowed to participate in U.S. elections. But after the Supreme Court’s decision in Citizens United, foreign entities had a new avenue to exert influence: corporations. Financial groups based in other countries can acquire stakes in U.S. corporations and then use that leverage to influence or control the corporation’s political activity, including contributions to campaigns and super PACs, and independent expenditures.

Companies like Uber, DoorDash, Amazon, and Airbnb have taken this loophole and run with it. These multinational corporations have used their money to bolster business-friendly politicians, influence ballot measures, and advance political agendas in their favor. Just to name a few examples:

Examples like these show not only how inundated our politics has become with corporate money, but also how easy it is for foreign interests to sway our elections through the activities of multinational corporations.

What’s to be done?

Last month, Representative Jamie Raskin of Maryland proposed a solution: the “Get Foreign Money Out of U.S. Elections Act.” The bill, based on the ordinance passed in Seattle and the model legislation crafted by our friends at Free Speech For People, would ban multinational corporations from contributing to candidates, parties, or super PACs, or from engaging in their own direct election spending. Under this bill, a multinational corporation is defined as any company that meets one of the following conditions:

“Six days after the Supreme Court invented corporate free speech rights in Citizens United, President Obama warned that the Court had just opened ‘the floodgates’ for foreign interests to funnel cash freely into American elections through corporations,” Rep. Raskin said in a press release. “He was right. The Get Foreign Money Out of U.S. Elections Act will stop this dangerous stream of foreign cash and influence from flowing in our campaigns through corporate spending.”

While the work of fully overturning the Citizens United decision will take time, passing this bill would eliminate one of the largest threats to our elections. It would also keep some of campaign finance’s biggest players from having a say in how American people vote.

And don’t forget to stamp your bills to tell the world CORPORATIONS ARE NOT PEOPLE!