This month, we’re spotlighting Rick Hubbard, who is walking across America to help inspire us to fix our broken democracy. Rick is a Vermont native and former national board member of Common Cause who previously walked with Granny D and has long advocated for ending the corrupting influence of big money in politics.

Rick’s walk will begin on October 1 in Los Angeles, with stops and “side trips” across the country throughout the rest of 2022 and 2023. 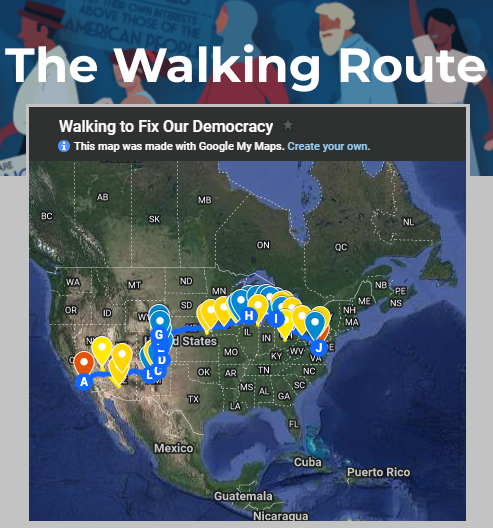 One of the great things about Rick’s walk is that it is a nonpartisan effort to raise awareness about the problems facing our democracy. Rick defines the overall problem succinctly: “Congress isn’t working for most people.” That’s a sentiment almost everyone can get behind!

If you’re part of the Society of Stampers, you know all too well about the dangers of money in politics. The role of Big Money in politics is a big part of Rick’s message, and he hopes to build support for legislation like the For the People Act and a Constitutional amendment to overturn the disastrous Citizens United ruling.

As Rick points out, 98 percent of Americans donate nothing to federal candidates or political parties, and only 25,000 individuals are considered “big donors.” If we want to fix our democracy, we need everyday citizens to wake up and demand an end to corruption and pay-to-play politics.

What can I do?

We’re on board with any effort to raise awareness of our broken system and help generate momentum toward change. Please check out Rick Hubbard’s “Walking to Fix Democracy” Take Action page for ways you can get involved with his effort.  And join him for portions of the walk!

There are also some promising legislative solutions in the works. We need to keep the push alive for fixes like the Ban Corporate PACs Act, and even Constitutional amendments to get money out of politics, like this one, which would overturn Citizens United to reign in corporate influence.

Legislation is important, but it’s only part of the solution. We need more efforts like Rick’s walking tour, to educate our fellow citizens. You can do your part by joining the Society of Stampers and stamping out the influence of big money in politics.

Will you help spread the word and do your part to fix our broken democracy? Don’t just tell people about the problem, stamp it! DEMOCRACY BELONGS TO THE PEOPLE, NOT TO THE DONORS!