Here at the Stamp Stampede, we’re thrilled whenever progress is made on democracy reform measures like the We The People Amendment. Our friends at Move To Amend have worked tirelessly to pass this legislation, stating once and for all that money is not speech and corporations are not people. Now the amendment is one step closer to ratification.

At a campaign rally in Chico, CA last week, a Move To Amend supporter named Victoria stood up and asked Senator Bernie Sanders if he would sponsor the We The People Amendment in the Senate.

Without missing a beat, Bernie replied, “The answer is yes.” He added, “[Money in politics] is at the center of everything else.”

We all need to follow up to make sure Bernie takes the next step! Will you send a message to Senator Sanders right now asking him to make good on that promise? Click here!

We know it’s an indisputable fact: every issue and the lack of reform associated with it can be traced back to the influence of money in politics. From climate change to healthcare, gun reform to income inequality, uber-wealthy corporations and individuals use their money and influence to fill their coffers at the expense of the American people.

Show your support for the We The People Amendment today by sharing the video of Victoria and Bernie on Facebook and Twitter. Take that support one step further and get yourself a Move To Amend stamp today! 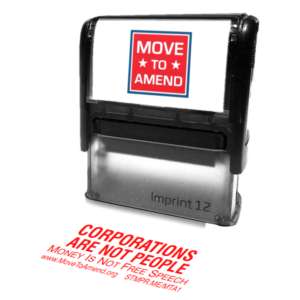