Americans may be divided over impeachment and the next election but they are united on one thing – strong majorities of Democrats, Independents and Republicans want political reforms that will restore a government that works for average Americans and not wealthy special interests.

Polls confirm that, but what many Americans don’t know is that citizen movements are turning the demand for reform into action.  Most people haven’t heard the news that citizen action in a growing wave of states made 2018 the best year for political reforms in the past half-century.

But now that vital story, long overlooked by the mainstream media, is finally coming nationwide on PBS next month, in a new documentary called THE DEMOCRACY REBELLION, filmed and reported by veteran New York Times and PBS FRONTLINE correspondent Hedrick Smith. 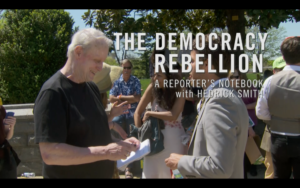 This is a major breakthrough for the reform movement.

THE DEMOCRACY REBELLION is the story of our movement – graphic personal portraits and compelling narratives of citizen heroes and reformers fighting for clean elections, voting rights, gerrymandering reform, and against dark money, Citizens United, and rigged elections.

THE DEMOCRACY REBELLION is a wakeup call to the country. It offers success stories – models of reform, inspiration to action, and a compelling vehicle for spreading the word that People Power stills works in today’s America.

As this broadcast rolls across the country from state to state, please use the broadcast as an opportunity to hold watch parties and movie nights that will help you engage and mobilize many more Americans in the cause of reform by showing People Power on the move – and winning!

To find out when THE DEMOCRACY REBELLION is airing in your city or state, click here. And here is a Discussion Guide for watch parties!

We hope you enjoy the film with friends and neighbors, and we thank you for your tireless effort to create a more just and equitable democracy.