It’s been over twelve years since the Supreme Court ruled in Citizens United that corporations are considered people under federal election and campaign finance laws. Hundreds of millions of dollars from corporations and big money interests have since flooded our elections and lined the pockets of politicians, drowning out the voices of American voters en masse. The amount at play has grown significantly with each election cycle. 2020 alone saw $5.9 billion in corporate PAC money contributed to candidates, up from $2.8 billion during the 2018 cycle and $3.5 billion in 2016.

But there are many in Washington and across the country looking to finally pull the plug on the big money machine. Take Senators Mark Kelly of Arizona and Jon Ossoff of Georgia. In January, they introduced the Ban Corporate PACs Act, a fairly self-explanatory piece of legislation. But what does it really entail? 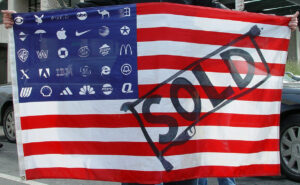 The majority opinion in the Citizens United decision, passed by a contentious 5-4 majority, argued that corporations are associations of citizens. By this logic, barring corporations from spending unlimited sums in our elections is a violation of these citizens’ First Amendment right to free speech. Needless to say, this is a stretch.

Even more ridiculous is the claim that independent expenditures, where corporations do not directly donate money to a candidate’s campaign, cannot be seen as corruption. The past twelve years have proven otherwise. The Citizens United decision, in tandem with the Appeals Court decision in Speechnow.org v. FEC that created super PACs, has led to policy agendas and legislation leaning heavily in favor of corporate and wealthy interests at the expense of everyday Americans.

How does the Ban Corporate PACs Act resolve the problem?

The Ban Corporate PACs Act takes aim at the “corporations are people” argument at the heart of Citizens United. If enacted, for-profit corporations would be barred from establishing and operating their own political action committees. Additionally, existing corporate PACs would need to be disbanded within a year of the bill’s passage.

“From lowering prescription drug costs to creating more renewable energy jobs, the influence of big corporations stands in the way of getting results,” said Senator Kelly in a press release. “Our legislation would put an end to the corrupt influence of corporate PACs in our political system.”

“There is so much corporate money in electoral politics in the United States and elected officials should be accountable to individuals, to the public, not to corporate donors,” Ossoff added in an interview with OpenSecrets in early March.

The bill unfortunately leaves a loophole for indirect spending, one that the senators acknowledge and hope to address down the line. Corporations can still contribute to third-party political action committees and super PACs. AT&T, for example, made contributions in 2020 to both the Republican and Democratic Senatorial and Congressional Campaign Committees, which in turn distributes contributions to candidates. No doubt this workaround will become more commonplace if this bill passes.

That’s why we must continue to push for campaign finance reform on every level of government. Passing the Ban Corporate PACs Act is the first step.

And don’t just say it, stamp it! CORPORATIONS ARE NOT PEOPLE!