We all know big money has a corrupting influence on politics and policy. But what about those members of Congress whose conflicts of interest play a major role in this corruption?

A new report from Sludge and the Guardian discovered that 51 out of 100 senators have investments in industries they are elected and assigned to regulate. These senators have upwards of $96 million invested in communications/electronics, defense, energy and natural resources, finance and insurance, real estate, and health corporations. Meanwhile, they are expected to draft unbiased policy regulating these industries. 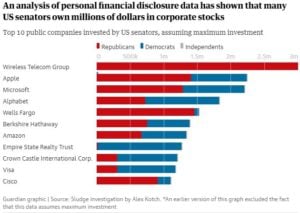 The Guardian explains why this is a huge blow to the American people:

Not only are the senators far wealthier than most of their constituents, but they’re in a prime position to increase their wealth via policymaking.

This ultimately means that these senators may risk our country’s social and economic footing in favor of their own self-interest. This is not why we sent them to Washington. This is why we need to GET MONEY OUT!

These conflicts of interest are corruption, plain and simple. Tell our senators: for the sake of our country’s future, we need to stamp money out of politics once and for all!