Last month was nothing short of a whirlwind in a year full of chaos. Insurrectionists stormed the Capitol, a new president was inaugurated, and the House passed a historic second impeachment.

One of the most surprising events in January, however, happened outside of D.C. In what many are calling an unprecedented event, ordinary Americans took on Wall Street’s 1% and beat them at their own game.

In this simplest of terms, here’s what went down:

Hedge fund Melvin Capital wagered that brick-and-mortar videogame retailer GameStop’s stock value (GME) would continue to fall, as it has for the past two years. The company believed that it could turn a profit by borrowing stock in GameStop, selling it, then buying it back at a lower price to return it to the lender. This is called “short selling.”

This bet, along with an announcement from GameStop that it was working to beef up its online sales, caught the attention of amateur day traders on the subreddit r/WallStreetBets, who began to buy stocks in droves. Many day traders looked to the fee-free trading app Robinhood to purchase stocks.

Within days, GameStop stock prices rose over 2,000%, to nearly $500 a share. As a result, Melvin Capital lost its bet and 53% of its value when forced to buy back its shares. This is what’s known as a “short squeeze.” 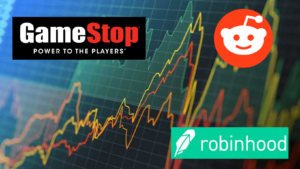 While some traders saw this as a potential profit opportunity, others purchased stocks as a way to stick it to the One Percenters.

“GME is about sending a message,” one Redditor wrote on January 28th. “For all the recessions they caused. For all the jobs and homes people have lost. For all the people that can’t pay for college because minimum wage has stagnated while wall street [sic] gets rich. For all the retail traders they left holding the bag. For all the times they got bailed out with our tax money while we got nothing.”

And for a brief period, it appeared they succeeded. But, as so often happens when the wealth of the already-rich is on the line, the system worked as designed and shut down the squeeze. That same day, Robinhood, TD Ameritrade, and numerous other trading platforms abruptly restricted its users from purchasing GME stocks, citing a desire to “reduce volatility.” The SEC released a statement saying that it was monitoring the situation and “will act to protect retail investors when the facts demonstrate abusive or manipulative trading activity that is prohibited by the federal securities laws.” Melvin Capital, meanwhile, recouped their losses with a $2.57 billion bailout from fellow hedge funds.

The backlash was palpable. Many argued that the implied “manipulative trading activity” of Reddit users was no different from tactics used by Wall Street traders. At least 30 class-action lawsuits have been filed against Robinhood for restricting GME purchases.

It’s unclear whether this was an isolated incident, or the start of a movement against Wall Street’s deregulation. The GameStop saga bears some resemblance to the Occupy Wall Street movement of 2011, which inspired Head Stamper Ben Cohen to found the Stampede. Grassroots movements like this are the key to progress in this country; the more we speak out about systemic injustice, the greater our impact will be. TKITKOS, Stampers!