Since the Supreme Court’s notorious Citizens United ruling, outside groups have spent more than $4.4 billion – including more than $1 billion in untraceable “dark money” – influencing federal elections.

Those figures, compiled by the Center for Responsive Politics and outlined in a recent Guardian article, demonstrate the disproportionate and corrupting influence of corporate interests. And they underscore the need for reforms to get big money out of politics. 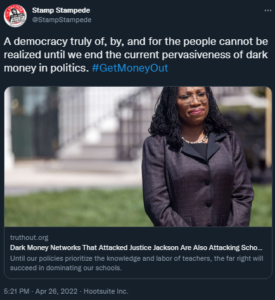 The 2010 Citizens United decision weakened campaign finance limits by opening the door to indirect spending by corporations. While individual campaign contributions to candidates are limited to a few thousand dollars per election cycle, the Supreme Court had already ruled in 1976 (Buckley v. Valeo) that the government could not restrict independent expenditures.

The combination of these two rulings, essentially ruling that “money = speech” and that “corporations = people,” opened the floodgates. As Noah Bookbinder, president Citizens for Responsibility and Ethics in Washington, puts it:

Citizens United has been a disaster for the American political system even beyond what we expected. We knew it was bad when it happened but the amount of money going into the political system has exploded since that decision, including a massive expansion in third-party spending, particularly unaccountable dark money spending.

We’re trying to stamp out the influence of big money in politics, but there are some promising legislative solutions in the works, too.

In our last blog entry, we covered the Ban Corporate PACs Act, which would push back against Citizens United by barring for-profit corporations from establishing and operating their own political action committees. There is also a push for a constitutional amendment to overturn Citizens United.

But those measures do not appear to be on the verge of becoming law. We need to keep the pressure on, both by raising public awareness and demanding that legislators push for campaign finance reform at all levels of government.

Passing the Ban Corporate PACs Act is the first step.

And don’t just say it, stamp it! CORPORATIONS ARE NOT PEOPLE!