It’s that time of year, Stampers: Independence Day is here again! July 4th is our favorite holiday over here at Stampede HQ. Beyond the ice cream weather, barbecues, and fireworks, we are reminded that our Founding Fathers created a republic that would ideally represent all citizens.

In reality, of course, this hasn’t been the case. Over our 243-year history, suffrage movements have expanded voting rights far beyond the land-owning white men of our early days to people of every race, class, and gender. But much of that progress has been rolled back by rampant voter suppression efforts, gerrymandering, and the influence of money in politics.

This Independence Day, there are many ways you can fight for our democracy while celebrating our country’s roots. We’ve compiled a few ideas:

While stamping parties can happen year-round, July 4th is a perfect time to combine ice cream and democracy reform. Engage activists in your community by talking about the issue of money in politics and how the Stampede is fighting back. We’ve got a guide to help you hold a large-scale stamping party, complete with Ben & Jerry’s ice cream.

We stamped nearly half a million bills in January to protest the role big money has played in the nine years since the Citizens United decision. This Independence Day, we’re taking it a step further. Take the pledge and help stamp over 1 MILLION dollar bills to protest the influence of corporations and big money donors on our democracy. You can pledge to stamp one bill or one thousand, the choice is yours! Remember to share your stamping on social media with the hashtag #Stamp4Independence!

If hosting a party isn’t your thing, there are other ways to get your friends and family stamping. Bring stamps to a barbecue, a pool party, or any other gathering you plan to attend. Encourage others to stamp bills they have on hand and check out the Stamp Stampede online. (Pro tip: if you are bringing stamps to a pool party, you’ll want ones that are waterproof, like our pre-inked pocket stamps.)

Skip the Parties and Take to the Streets!

Many people choose to spend the 4th of July as a day of activism. There’s a lot to celebrate about the United States, including First Amendment rights to speech and peaceful assembly, but there’s still a great deal of work to do. Check your community calendars, Facebook, and Twitter for rallies on or around July 4th.

With your help, we might be a little freer by next Independence Day. Happy 4th of July, and happy stamping! 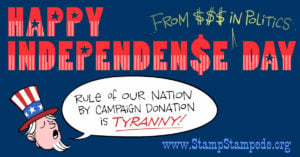