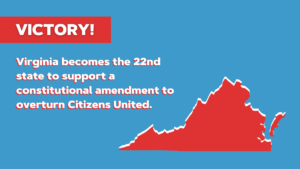 Thanks to the efforts of the Virginia Chapter of American Promise, Take Back Our Republic, Public Citizen, People For The American Way, Free Speech For People, Common Cause, and Virginians across the political spectrum, the Virginia legislature has officially signaled its support for a 28th Amendment to the Constitution to get big money out of politics.

“Two hundred and 45 years ago, the Virginia Declaration of Rights guaranteed us the right to regulate political contributions and expenditures, by stating ‘That all power is vested in, and consequently derived from, the people.’ Passing this constitutional amendment is a major step towards fulfilling this 245-year-old promise,” said John Pudner, Executive Director of Take Back Our Republic and Richmond, VA resident. “The recent efforts to claim that there can be no limits on pay-for-play politics undermines Virginians’ right to pass legislation through their elected members of Congress and the State Legislature.”

“Virginia is one of only five states with no limitation on campaign finance contributions,” said Michael Deal, American Promise Virginia Chapter member and resident of Vienna, VA. “By becoming the 22nd state to support efforts for this Constitutional Amendment, Virginia will have taken an initial, highly symbolic step in restoring ordinary citizens’ voices.”

Nancy Morgan, leader of the American Promise Virginia Chapter and resident of Alexandria, VA, added: “It is exciting that our Virginia State Senator, Creigh Deeds agrees with citizen activists that 245 years after the Virginia Declaration of Rights endorsed that ‘all power is vested in and derived from the People’, that there is a need for an amendment to the U.S. Constitution which would allow Congress and the states to regulate election spending.”

16 states now stand between us and a constitutional amendment. That’s why we need to keep making our voices (and our money) heard! TKITKOS!