Yes, there’s a big party in Boulder, CO tomorrow for Stamper #100,000, but it’s really a celebration of Stampers #1 thru Stamper #99,999— you’re the ones who got us to where we are today.  Especially those early Stampers that joined us on faith. Before stamping was cool.

Thank you for being there with us.  For your support and your patience as we worked through our growing pains. We could never have gotten here without you. 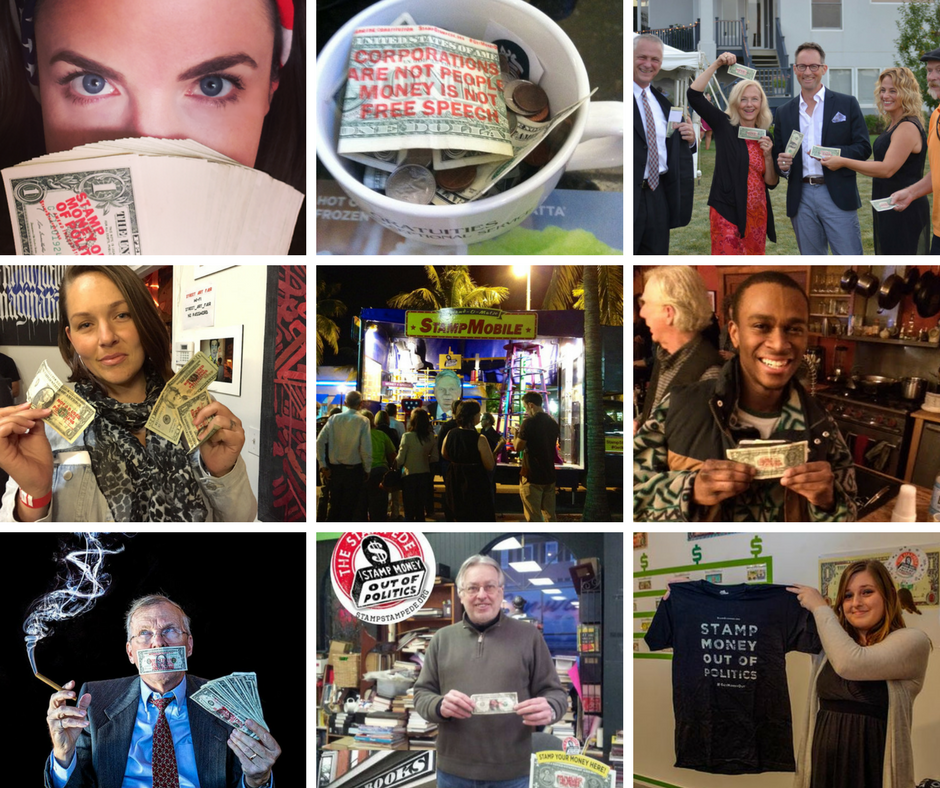 We’re halfway home (19 states (out of the 38 needed)  have called for a 28th amendment to get money out of politics restore the democracy we deserve — and we’re not stopping till we get there.

I don’t mind being a tiny grain of sand, as long as I’m part of a landslide.

The shift is happening. The land is sliding. And if we keep it up.  If we can keep hope alive, pretty soon the whole landscape will change.

Pete Seeger has told a little story about sand. He once told it to me when I was feeling down and without hope.  And I’ll tell it to you.

Pete was walking along one day and he came upon a huge seesaw with a big heavy rock on the side that was down and a big bucket on the side that was up. There were all these little people scurrying around with teaspoons taking sand from a big pile and climbing up a ladder and dumping it in the bucket and then going back for more sand. But Pete noticed that there were holes in the bucket and the sand was running out as fast as they were putting it in.  So he grabbed one of the guys with the teaspoons and said, “Don’t you see? The sand’s running out as fast as you’re putting it in. You’re never gonna get that seesaw to switch around.”

And the guy stopped for a moment, mopped his brow and said, “Oh, you don’t understand. There’s more of us with teaspoons all the time and  sooner or later we’re gonna be putting sand into the bucket faster than it’s leaking out and then shwoop, the seesaw will switch, and people are gonna say, “How did that happen so fast?” and we’ll just say “us and our little teaspoons.”

Well, we don’t have teaspoons, but we have stamps.  And we’re stamping messages on dollar bills that say things like: “Not to be used for bribing politicians” in order to create a mass visual demonstration of support for change. Each stamped bill is seen by approximately 875 people. That means if 1 person stamps 4 bills a day for a year, the message will reach 1 million people.

We started in 2012 with just a handful of people stamping. Now we have 100,000 people across the country now stamping and soon it will be 150,000 and then 200,000.  The movement to take back our government is snowballing. And one day, shwoop, the seesaw will switch.